My young human is getting old. Yesterday he turned 16. He would have gotten his driver’s license yesterday on his actual birthday, but the day before, Mom discovered a snafu with the driver’s ed class that he took in the summer last year. When that discrepancy is fixed, he’ll be able to get his license. Jamie was disappointed and frustrated, but he acted like an adult about it and said he understood that these things happen. Personally, I think he took this disappointment much better than most adults I know! Woof! He should be able to get his license in about two weeks.

Sunday, we had a birthday party for Jamie and his friends. Lots of nice young humans came over, and we spent most of the time outside. They swam, played bean bags, badminton, volleyball, and pickle ball. Naturally, I got in the games where I could. I also tried to sneak some birthday cake. I was so tired out by the time the last one left that I fell asleep on the couch. Mom practically dragged me upstairs.

Yesterday was, besides Jamie’s birthday proper, the first day of school. He had to wear his shirt and tie, because they were taking ID/yearbook pictures as well. 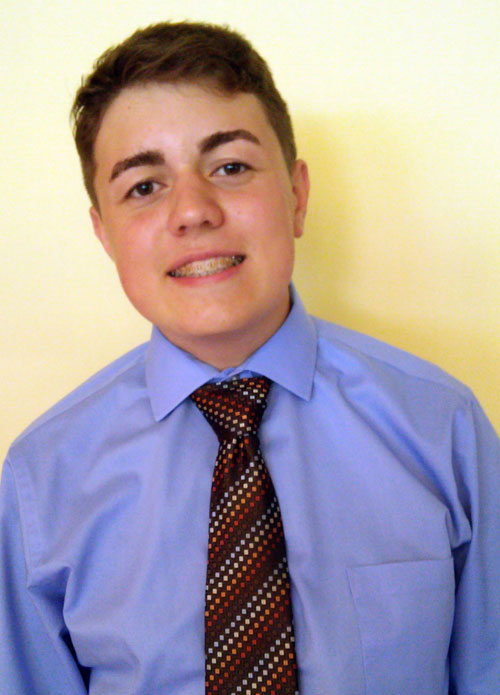 Here is my young human, all ready for the first day of school as a Junior.

The cool thing about it is, today he did NOT have to go to school, because it is the day the Freshmen have the school to themselves to figure out where they are going for classes. The schools did not do that when Mom was in high school back in the stone age. Way back then, they just threw everybody into the school and let them sink or swim. I think it is nice that the new kids have a day to get grounded in their new surroundings before the pressure of crowded hallways and trying to get to class on time. It’s much better on the nerves, I think.

Tomorrow is going to start early; that is, getting up at 6 a.m. for the first full day of school. Mom says that for her, “summer is over” because school has started and the daily grind of Fall is here already. She says she’s going to keep the pool open for as long as possible, though, and try to hang on to Summer for a little bit longer.

Best of luck to everyone starting school or a new venture!  Woof!

I’m going to cover a lot of ground in this blog.

Yesterday was Doug’s (weggieboy’s) birthday. I don’t know how many candles, because cb (contrafactual) didn’t mention that to me. Doug is still in rehab and hasn’t gotten home yet. That doesn’t seem right to me, but I’m not “medical” I’m “doggical” and I know this dog would rather recuperate at home. Please keep Doug in your thoughts, and a Woof! and tail wags to cb for keeping all of us posted.

I would like to put my two paws in regarding the cowardly and despicable terror bombings in Belgium. My heart and soul go out to the victims of terror attacks. I stand with you, Brussels.

It seems that certain groups of people want all the people to be the same. We find this at home and abroad. However…

I wish, I wish, with all four paws crossed, that that could happen. But I know it won’t, and that makes me sad. Fear and ignorance make the humans hate each other. I’m a dog. I love everybody, so I don’t see why people have to shove (insert belief here) down each others’ throats. Just co-exist. It should be a no-brainer. Love is so much stronger.

On to other things.

Today is Puppy Day, and to celebrate, I have this nifty picture of me laying on Dad’s lap.

It’s really quite apparent that I’m light as a feather and he doesn’t even know I am there, shoving him off the couch. I’m really a 6 pound lap dog, not a 60 pound American Staffordshire Terrier. See? See? Dad doesn’t mind a bit.

Woof, you humans, woof. Paws crossed you have a dog in your life.

That’s a picture of me diving into those luscious wet noms for my birthday. Nothing but dry kibble since then. Oh, yes, and then there’s the treats (before you go feeling sorry for me, woof woof woof!) 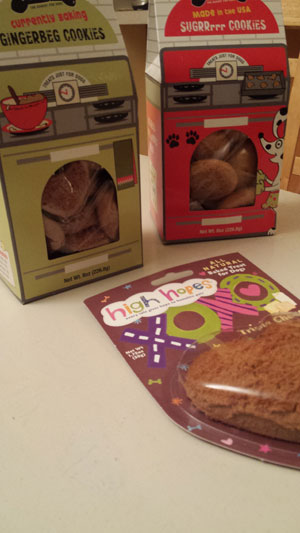 *When Mom was a little girl, she read a wonderful story called, “The Wednesday Witch” by Ruth Chew (the book is since out of print. Mom still  has a copy, and has read it to all the kids). Basically, it’s a story about a very imaginative little girl; a cat named Cinders; magic scissors (they don’t actually cut anything, just make the item smaller); a Wednesday Witch; and a magic flying vacuum (canister style) named James.

When the Wednesday Witch (her magic was strongest on Wednesdays, the day she was born) wanted James to fly, she would point the wand end straight out and arrange the hose behind her like a tail. Then she would administer a horrible kick to James’ sides.

When the imaginative little girl got James, she realized he would fly just by pointing the wand. James was very grateful not to be kicked. And this is how Mom imagines herself trying to get the computer to work. Straddling the unit, pointing the mouse into the air, and giving it a couple of good, swift, kicks.

Oh, another point. Every vacuum Mom has ever owned has been named, “James”.

Hello, Maggie tells me many of you have sent birthday greetings and wishes for me and my husband, Jim. Thank you so much! I would like to share with you what I did on my birthday.

Maggie’s “older brother human” Erik came over and we went to this place called, “Art a la Carte” in Orland Park. There was a party of about 10 of us, and the gist of the thing was, you pay for an art class, bring a little snack and a drink, and have an art lesson. Art a la Carte supplies everything you need to create your own masterpiece, you bring the joie de vivre.

The theme of the party was, “Beach Bums”, and the painting was of three women sitting facing the ocean on the sand. The instructor shows you how to make the painting line by line. I REALLY was thinking of my friend GiGi when I saw all the art everywhere. I knew she would love this place.

Three of us, Erik, Deanna, and I, decided to be rebels and paint our own inspirations. The studio director politely told us that was just fine, but we had to sit at the end of the table so that others can see the lesson. Agreed!

The caption is, “Mother have Mercy”. I hope you like it.

It was great fun and wonderful camaraderie.

Later, I got to see my (step)son Mike. I was so glad to see him, and the visit was much too short. It was great having all the kids in one place.

Overall, I would say, it was the best birthday ever.

He looks just a little happy!  I love my human very much.

Dogtor B, an ex-shelter dog, became a therapy dog in October 2016. He loves to talk about his endeavors, his brother Sky, and life in general as an American expat in New Zealand.

Must Be This Tall To Ride

I'm a single dad documenting his journey. A guy trying to walk a higher path. And messing up. A lot.