My humans went wandering off to Dubuque, Iowa this weekend, and let me spend some time with the Alpha Male, Daryl, at Canine Obedience College. I was very excited to see him again. He runs us dogs around until we are happy to see our crates at the end of the day.

Meanwhile, the humans drove all the way to Iowa to see this thing, called the “Fenelon Elevator”. The humans call it the “Fenton Elevator” after Mr. Fenton Hardy from the Hardy Boys, but they’re a little weird at times.

Unfortunately, as they drove into the town “Cable Car Square”, they saw the sign that said the elevator was CLOSED from November 30 to April. Foiled again!

Let me tell you a little about this elevator. First of all, it’s not really an “elevator”, it’s actually a tiny cog railway called a “funicular”. It’s a small, steeply inclined, straight layout of track that goes up a hill. The cars run on a system of counterweights.

Mr. Fenelon built this railway/elevator. He was an important businessman who lived on top of the hill. He wanted to be able to go back and forth from his office to home for lunch and a rest, but it would have taken so long to get a carriage back and forth that he decided to build the funicular, and later, opened it up to the public. It costs about $1.50 to ride. Here is a pic that Jamie snapped in the daytime:

You can see, the cars are balanced in the middle. All was not lost on their trip, though, as they got some sightseeing in. Here is the small railway at night: 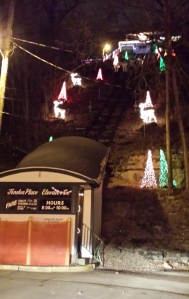 Jamie got this great picture of a paddlewheel, which is in front of the museum on the river:

Finally, they wound their way back home, and stopped in the charming town of Galena: 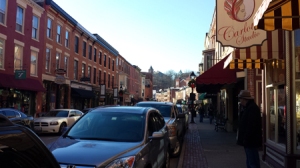 That guy in the shot photobombing with the hat is, of course, Dad.

My humans had a very good time on their travels.

As for me, I am exhausted. I came home, took a long drink, had some dinner and a bath, then conked out on my chair. I’m not moving for at least two days. 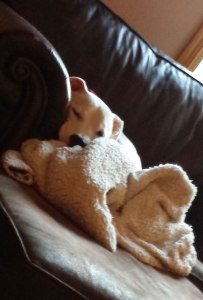 I’m hiding, because I’m wet and don’t have my collar on (NAKED!) so I’m being a little shy.

Hope you all had a great weekend!

I’ve been very busy lately!  Let me be the first to say, I know nothing – nothing at all – about the 50 pounds (and then some!) of dog poop that the melting snow uncovered in the backyard.  (Gives most innocent look)

Mom and Jamie went out back to take advantage of the nice weather – umm, clean up the landfill of poop – while I sniffed at the remaining ice-packed snow and kept a lookout for That Rabbit.  After the massive cleanup, showers were had by all.  The stinky humans needed it.

This weekend, Mom, Dad, and Jamie headed out for some real rest and relaxation at The Herrington Inn, Geneva, IL (check out the place at: http://www.herringtoninn.com).  That means I headed out to Canine Obedience College in Alsip (to be fair, http://www.canineobediencecollege.com) for a rousing weekend with The Alpha Male.  It was a play-hard weekend for me, and I came home with my tail wagging and happy to see my chair.  Nothing like the “take me a week to recover from one night” at PetSmart.

While Mom was out, Laurel swung by and caught me napping in the crate.  She took me out for a long walk to the stables and gave me a relaxing massage afterwards.  Please don’t tell me I’m spoiled.  I know that I am!  We went out back and I saw the rabbit.  I laid my ears back and went to give chase when – yank! – I realized I was still on a lead and attached to Laurel.  Foiled again!

Mom and Jamie are putting me out on the tether now.  I guess I’ll have to get used to it.  Mom says there’s no keeping me in the yard when that rabbit is around!

Spring is coming…I can feel it!  And I can see its bunny ears! 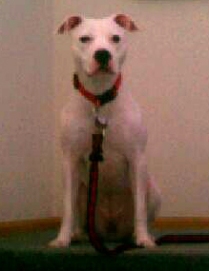 Dogtor B, an ex-shelter dog, became a therapy dog in October 2016. He loves to talk about his endeavors, his brother Sky, and life in general as an American expat in New Zealand.

Must Be This Tall To Ride

I'm a single dad documenting his journey. A guy trying to walk a higher path. And messing up. A lot.