Mom looked up and noticed a Spot on the ceiling in the kitchen. This was a couple of weeks ago. Mom wasn’t sure about the Spot, so she painted over it.

The Spot came back with a vengeance.

Mom told Dad she thought the upstairs toilet was leaking. Dad said, “Impossible” because he had just fixed the toilet.

The Spot got worse. Mom started to worry.

So another week went by. The Spot began to look like a large bruise on the cheek of the ceiling.

Mom said, “We are going to get mold in here. And someone is going to sit down on that toilet and fall right through the ceiling!”

Mind you, nothing – nothing – gets done around here unless there are dire consequences to contend with. I guess the idea of sitting on the throne and then finding himself on the first floor kitchen in a compromised state shook Dad out of his “Spot” complacency. He and Jamie went to Menard’s to look for Stuff to Fix the Toilet. When they came home, Dad said he wanted “just to check the score” of the ballgame. Mom said, “That’s how a five-minute job turns into a five-hour job. I’ll check the score for you and let you know what’s up. Turn off that TV.”

Defeated, Dad went to work disconnecting the toilet and replacing the seal.

Mom helped Dad clean up the wax residue and then they installed the new seal. Dad managed to squeeze in on the floor between the toilet and the toilet paper roller-thingy. Delighted to see Dad on the tiles, I jumped on his chest and started licking his face. I’m sure my moral support helped a lot, because he got that toilet fixed “lickety-split”!!!

Mom came downstairs and painted over the Spot on the ceiling with some mold killer. Now the Spot is white. Dad says we are going to watch it for a day or two to make sure there is no more leaking; then Mom will repaint the Spot to the proper color.

What a way to “seal” the weekend!

Well, today certainly is proving to be interesting.

Mr. Bourke and his friend Mr. Dave came over early this morning and got started in the front hallway.

Some people call this a “foyer” and argue how to pronounce it. Mom calls it, “the atrium” because it’s so high she swears birds could fly up there. I haven’t seen any, though.

Mom originally had me in the crate while the men set up for work. Then she let me out, but kept me on the leash close to her, so I couldn’t get underfoot.

I watched them getting prepared. 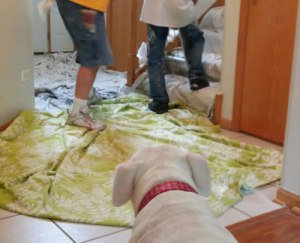 I couldn’t believe they were setting up ladders way up there. Mom gulped a little and said she felt queasy and could not watch. She asked if she should be ready to call “911” at a moment’s notice, but Mr. Bourke laughed at her, and said it wasn’t going up that was a problem. It was falling down that hurt. Somehow, that didn’t make Mom feel better.

Happily, no one did fall down.

Oh yeah. They are up there. The ladder to the right is on top of the hall closet and Mr. Bourke climbed up there via another ladder to paint the circle around the chandelier. You can barely see the tip of the window frame. Mr. Dave went up there and cleaned that.

If I didn’t understand the humans before, I surely do not now, what with all this agility climbing and painting of high places.

I’m re-taking my spot on the couch and keeping an eye on everybody. Mom has the phone next to her in case she does have to call “911”.

The humans Jamie and Mom continued to toil away today at the painting of the ceiling.

They took turns choosing music to listen to while doing the job.  Mom went first and chose some Blink-182 “surf punk” music.  I liked it!  The driving guitars made me feel frisky.  So I ate a clean paintbrush.  Jamie heard me crunching away while Mom rolled the paint across the ceiling.  Foiled again!

Then it was Jamie’s turn to pick the tunes.  Jamie (DJ McMassacre) likes EDM, or Electronic Dance Music.  Mom likes it just fine, and they painted while jamming to the club beats of Bastille, Skrillex, Fonix, and the like.  I liked this music as well, (they didn’t blast it too loudly), and I did my part to help by chewing up the paper dropcloth, hiding under the ladder, and licking any faces that came into my line of fire.  But, when I stole Jamie’s shoe, Mom threatened to put me in the crate for a cool-off.  She’d had enough of my shenanigans!

So I decided to cool off myself.

The ceiling is now finished, and the humans are going to move on to painting the walls.  All told, they painted the ceiling that flows from the kitchen, to the eat-in area, to the living room.  It took almost 3 gallons of paint and nine and a half hours.  Dad says the ceiling hadn’t been painted and it was “thirsty”.  Jamie and Mom used a special paint with primer built-in that was low VOC.  It was still a huge job.  I’m so proud of them!  Mom says the walls should be easier, but she’s not holding her breath.

As for me, I can’t wait to hear more music!  Woof!  Love, Maggie

Dogtor B, an ex-shelter dog, became a therapy dog in October 2016. In 2020 he moved from Florida to New Zealand. He loves to talk about his endeavors, his brother Sky, and life in general as an American expat in New Zealand.