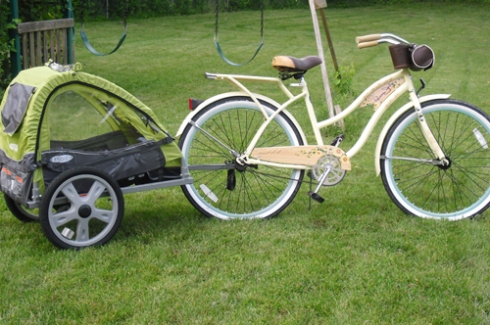 A huge box arrived today from the man with the big truck.  Jamie and Mom were very excited over it!  Jamie tore open the box and proceeded to tinker around with a very strange-looking thing that he called, “The Maggie Mobile”.  What this had to do with me, I had no idea.  But I was about to find out!

Soon he had built a crate on two wheels that he was very proud of.  Then he went into the garage and there I was shocked to discover that both he and Mom had the two-wheels that nearly run me down when I am walking in the woods!  They call them “bikes” but Jamie calls the people who ride them, “Lance Armstrongs”.  I’m getting a little off track here, but when we’re out in the woods, he’ll say, “Look out, Maggie, Lance Armstrong at 1:00!” then he pulls me to the side as some guy in tight pants whizzes by on the two-wheels, er, bike.

Anyway, once I got over my shock that my family owned these things, I was even more surprised when Jamie pulled out what he called a “dogbone” and connected the crate (he called it a “trailer”) to Mom’s bike and said, “Let’s take Maggie for a ride!”  Then they tossed assorted treats into The Maggie Mobile and tried to coax me into it.

The rolling death trap.  NO WAY was I putting a paw in there, much less my head and tail!  Oh, they tried.  They even picked me up and threw me in!  But I jumped back out again through the flap, snatching the treats as I went.  Ha!!

But I may be in trouble over the weekend.  Dad says he’s going to strap me in!!!

love nature, and all things creative